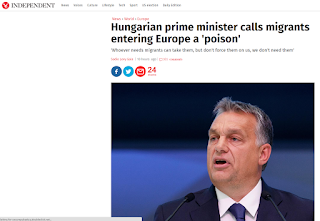 Looking at events in Europe, one can certainly agree with the Hungarian Prime Minister that something is going very wrong.

When we were still trying to recover from shock horror because of terrorist attacks in France and in Germany, an Catholic Priest had his throat cut off during mass at a small town in northern France.

The attack against Père Jacques Hamel very much represents what Europe as a whole is facing right now.

The Hungarian Prime Minister is quite straightforward when he says 'whoever needs migrants can take them, but don't force them on us, we don't need them'.

Everything follows Angela Merkel's unilateral statement opening the floodgates without consulting other EU countries and her attempts to force countries that have not been asked about immigration.

Later on, Angela Merkel threatened EU countries trying to force them to accept quotas. The situation got so bad that Bavaria told Angela Merkel that they would send immigrants to Berlin.