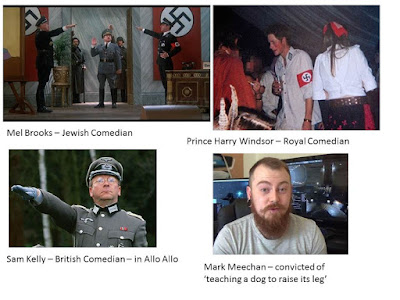 How many movies could not have been made because making a salute or wearing an uniform could have been said to promote anti-Semitism? How many comedy acts would have been banned?

My personal opinion is that Sheriff O'Carroll is spending too much time in courtrooms and too much time listening to the muses of Political Correctness. He should spend more time watching satyre and comedies to be able to enter the real world.

The video went around the world for the enjoyment of countless viewers. 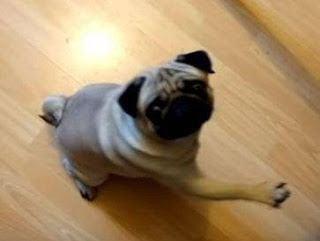 Posted by London Regional Press Office at 23:33 No comments: 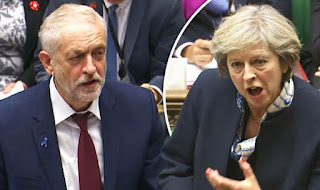 The handling of the incident involving a former MI6 agent has been the lowest point of Theresa May's career as Prime Minister of Britain.

For months, Theresa May has been battered and bruised for her performance in relation to the EU and an elusive deal to settle Britain's withdrawal from the EU.

Of course that in a first instance the incident involving the MI6 former agent and his daughter might have looked like a very good opportunity to divert attention from troublesome negotiations that have divided the Conservative Party from top to botton with factions within the party that threaten to derail the whole Brexit process. When the genie got out of the bottle as the incident got a life of its own, mass media pressures forced the hand of the Prime Minister to make a statement when there isn't concrete evidence about who's done it and why. She accused the Russian government and issued ultimatums that in the end will show how weak she really is. Her behaviour threatens to damage not just relationships between the United Kingdom and the Russian Federation but also relationships that will negatively affect the mass media. When the idea of banning RT was put forward, the Russian Federation immediately said that should Britain ban RT all British media will not be allowed to operate in the Russian Federation. But this is only one aspect of the predicament of her own making.

The Conservative Party has a very difficult relationship with many of the local Conservative Party associations and a disastrous performance in the coming local elections will not improve relationships between Central Office and local associations many of which are on a war footing complaining that Central Office imposed on them candidates that they didn't want. This time round the issue is local elections but the next time round it will be about seats in the House of Commons. A weakened leader, a divided Parliamentary party and seriously strained relations between Central Office and local associations is not a recipe for success.

Posted by London Regional Press Office at 21:56 No comments: 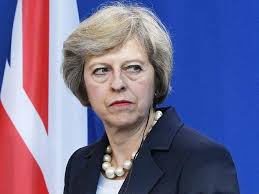 The anti-Russian hysteria came to a climax in Britain, in a country that produces chemical weapons in Porton Down close to populated areas.

In the process, the Prime Minister failed to explain why the Conservative Party is being funded by criminals who hate President Putinn and hate the Russian Federation.

A whole chapter of fabrications was once again mentioned. Alexander Litvinenko was killed by MI5 when Andrei Lugovoi came to offer Litvinenko safe passage in exchange for compromising evidence against Boris Berezovsky at a time when Berezovsky was supporting Chechen rebels allied to AlQaeda and Taliban when British soldiers were fighting in Afghanistan.

After Alexander Litvinenko's death, I was asked to gather evidence against Boris Berezovsky but Berezovsky was killed by MI5 to tie up loose ends and put an end to the whole saga that was deeply damaging for the British government.

Posted by London Regional Press Office at 20:03 No comments:

Mandela's Dream is over. Anti-White Racism in South Africa

Mandela's dream is over. Anti-White Racism in South Africa

Black gangs killing white South African farmers is not something new. It has been happening for decades as a formerly buoyant South African economy turns into slums. With the assumption of a new President, this is ethnic cleansing on an industrial proportion. Farmers are going to be dispossed and sooner than later whatever is left of the agricultural economy of South Africa is going to go down the drain as it has gone down the drain in many African countries. Sooner than later we will see adverts on television calling for donation to feed the poor black population of South Africa.

Expropiation of land without compensation will be followed by expropiation in other fields of activity and this includes mining. Mandela's dream of a rainbow South Africa is over or should we say that it could never be possible in a country that is now ruled by Black Racists.

At it happened in Zimbabwe but in a much bigger scale, corruption and lack of training will lead to poor production and starvation followed by riots. For many years, the ANC government policy of transfer has left many farms in a very state and unproductive, generating even more misery for those who are already living on the edge. Let us remember that in South Africa, many thousands of children are selling themselves for sex in order to be able to eat and in the process spreading disease with STI including Aids on the increase.

Nelson Mandela's hopes went to his grave. What is rising in South Africa has nothing to do with peaceful coexistence. It is more about nonsensical ideological misery.
Posted by London Regional Press Office at 23:28 No comments: