Alice in Wonderland: A former British soldier facing court for having fought against Islamic State

I have believed for a very long time that Lewis Carroll didn't write Alice in Wonderland as a fictional story but as a true description of Britain where cuckoos reign supreme. A former British soldier is facing court charges of terrorism because he fought against a terrorist organisation called Islamic State, Daesh and so many other things.

Imagine the scenario in which during World War Two a British soldier had been arrested and taken to court accused of fighting against National Socialist Germany. It seems that apart from being related to  the acquisition of pornographic material registered as parliamentary expenses, the then Home Secretary Jacqui Smith produced a monstruous piece of legislation that is being used for political purposes and to generate irrational court cases. Ah, by the way, Police resources and other resources including expenditure involving the Crown Prosecution Service are being lamentably wasted, once again, in cuckoo cases.

But there is a lot more. You might have seen Prime Minister Theresa May during her visit to China, talking about building trade opportunities with China. Just a few days later a warship of the British Navy was sent to the Sea of China to 'put pressure on China'. You couldn't possibly make it up. Britain is sending ship to the Sea of China to try and put pressure on China the very same country the British Prime Minister recently visited to promote trade agreements.

For all that matters, the sending of a single ship to the Sea of China is a meaningless gesture that would have the same effect as the sending of the same ship to the Bermuda Triangle. The Royal Navy that could soon see their numbers cut - once again - with the dismantling of the Royal Marines is wasting money in meaningless gestures. Britain doesn't have enough ships to patrol its own costal waters and is having to borrow American planes to chase submarines because it doesn't have enough planes of her own.

Posted by London Regional Press Office at 23:38 No comments:

For East Germany literally unrepresented in new German Coalition (that might or might not be depening no how SPD members vote to approve or disapprove of the deal made by Angela Merkel and Martin Schulz.

Martin Schulz wanted to be the new Foreign Secretary (Secretary for Foreign Affairs) but he was rebuked by members of his own party already.

Alternative für Deutschland is particularly strong in Saxony as more and more Germans march against so called mainstream political parties that no longer represent them.

Changes are coming and it is just a matter of time for a new political party to take over the reins of power in Germany.
Posted by London Regional Press Office at 21:01 No comments:

Alternative für Deutschland: Ready to open its own Newsroom in Germany 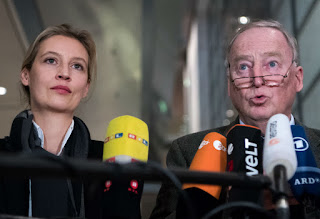 Given the campaign of disinformation carried out by German mass media and other mass media like the BBC, SKY, CNN and others that usually tend to spread rumours, innuendo and disinformation in a campaign to demonize legitimate political parties, Alternative für Deutschland is ready to launch its own Newsroom to counter Liberal and Marxist disinformation.

The aim is to reach German voters directly without the distortions generated by so called mainstream mass media. The news service will work round the clock and we look forward to the implementation of this new initiative for Freedom of Speech and a Free Press.

Posted by London Regional Press Office at 14:21 No comments:

Germany: Rise of National Socialism is not if but when 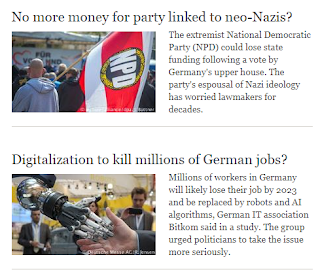 Germany: Rise of National Socialism is not if but when

Political repression in Germany will accelerate the process that will lead to the rise of National Socialism.

The Establishment believes that banning political organisations and sending people to jail for daring to disagree while implementing policies that are ruining Germany is the solution to their problems.

As the chaos generated by flood immigration that brought with it terrorism and fear is increasing, more and more people are coming out and calling things for what they are.

CDU/CSU had the worst electoral performance and SDU didn't do any better. Why on earth can anybody believe that two of the main losers in German Elections will be able to maintain political stability in Germany? Automation, the closure of viable industries that create jobs coupled with mass migration will lead to unemployment and unemployment will lead to confrontation. Do Germans want Angela Merkel? No, they don't. Do Germans want Schulz? No, they don't. The Establishment knows that and sooner than later the reactions will come from within the German Establishment which is exactly what led to 1933.

Germany has an instinct for Ordnung and it knows that Merkel and Shulz can only produce expensive and dangerous chaos.
Posted by London Regional Press Office at 17:05 No comments:

Subcontracting: Simple can be beautiful because big can be very unpredictable

Subcontracting: Simple can be beautiful
Events surrounding the downfall of Carillion and doubts that have arisen about the viability of Capita remind us that the process of public tender is not always a version of Paradise. Private companies drive their prices as low as they can in order to win public contracts and go beyond what is reasonable.
The longer the project involved is going to last the higher the chances of costs rising and thus driving the entire project aground and this might be one of the fundamental reasons Carillion got to a point when margins became so small or even negative that it became non viable. Whether this is the case when talking about Capita remains to be seen.
The British government is not alone when dealing with outsourcing services. The BBC outsources services and not only that - much of what is shown by the BBC is actually produced by private companies that sell what they produce to the British Broadcasting Corporation. The British Armed Forces outsource services. So outsourcing services is not the main issue. The issue is how those in charge of dealing with bidding processes deal with the viability or non viability of what is being proposed.
A company like Carillion or a company like Capita can have a wide range of projects activities happening at any given time and have market realities to deal with and not just in terms of suppliers. The exchanges and what investors think about what should be the real value of shares that directly affect capitalization in any given company can have a dramatic impact on the viability of any given company. For Capita loosing about 40% of its value in one day is a gigantic earthquake.
Much has been said about banking and about the need to separate ordinary banking operations from investment banking that is fraught with risks. The aim in this particular case would be to protect ordinary savers so that their livelihoods are not taken away by failing investments. The fact that share values can turn wealth into dust is not reassuring when dealing with contracts awarded by public tender.
﻿
Posted by London Regional Press Office at 20:17 No comments: