If Sinn Fein doesn't want to be in the British Parliament, they should resign their seats 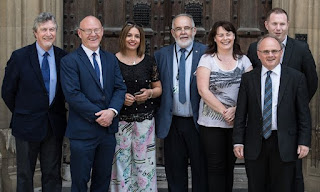 Sinn Fein doesn't recognise the British Parliament and its elected Members of Parliament don't want to seat in the House of Commons.

This anomaly should be resolved straight away. If you are elected to serve as Member of Parliament and you never join the British Parliament then your seat should be declared vacant and by-election should take place.

If a political party stands in a General Election and when having Members of Parliament chooses not to enter the House of Commons, then the said party should not be allowed to take party in General Elections.

In the Good Friday Agreement, Sinn Fein representatives should have been told that unless they agreed to take part in politics representing their electorate in the House of Commons they would not be allowed to stand in British Politics.
Posted by London Regional Press Office at 22:27 No comments: 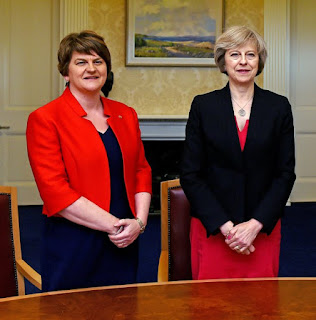 Arlene Foster clearly knows the agenda of Labour Party Leader Jeremy Corbyn and of Sinn Fein, agenda that has been publicised when the notion of a United Ireland was put firmly under the spotlight.

During political campaigning for the 2017 General Election, Jeremy Corbyn was asked repeatedly about his political sympathies and his closeness with Sinn Fein (political arm of the Provisional IRA).

Secessionist political parties like SNP got a cold shower with the advances of the Conservative Party in Scotland but Arlene Foster knows full well that the Conservative Party is the best guarantee of keeping Northern Ireland as an integral part of the United Kingdom. Should Jeremy Corbyn become Prime Minister, the chances are that Northern Ireland will not longer be a part of the United Kingdom.

Before a meeting due to take place tomorrow in which both DUP and the Conservative Party will lay down the foundations of a political agreement, DUP sources were quick to refute rumours about sectarian issues on the negotiations table. The weight of the public sector in Northern Ireland is considerable and therefore investment in the public sector and the issue of pensions in the public sector are fundamental in any agreement. This is why Arlene Foster spoke about maintaining the triple-lock on pensions. The Conservatives that were not keep in keeping the triple-lock would give way on triple-lock pensions to keep the DUP onboard.

Gender issues that deeply trouble the Conservative Party would also be put aside to focus on economic issues that would benefit Northern Ireland and strengthen DUP with more jobs and more investment.

As the news from Spain is about a Referendum on Catalonia's Independence, many would be reassured by a move to reinforce the integrity of the United Kingdom. Just a few days ago, SNP decided to put on hold its proposals for yet another Referendum on Scottish Independence after election results that clearly benefited parties opposed to the break-up of the United Kingdom.
Posted by London Regional Press Office at 19:53 No comments:

While Police Forces including an SAS group continue search trying to secure Central London, civilians with hands on their heads are being driven out of a danger zone.

The realities of failed integration and of ghetto realities that have existed for a very long time are haunting what accounts as the fifth biggest economy in the world.

Once again, Britain is on the spot. The country is now renowned because of the number of atrocities committed on its own soil.

Not long ago, during the electoral campaign for the 2017 General Election, political parties were discussing about the so called Nuclear Deterrent. The Nuclear Deterrent cannot protect Britain from the enemy within.

The fact remains that flood immigration, regional conflicts outside Britain and the easy of transit in and out of the country, combined with failed integration are all contributing factors for what is happening now on a regular basis.

Areas where immigrant communities are now majorities are hotbeds for extremists. Attacks like the ones carried out last night in London are not preventable. There is no advanced technology involved. There is no massive planning. They can be an impromptu attack launched by a small group of individuals using a vehicle, knives and hand guns.

Until now, apart from three of the individuals involved in the attack, there have been 7 fatalities and more than 40 casualties but there are still 21 people fighting for their lives and the number of fatal victims can still go up.

Chancellor Angela Merkel said not long ago referring to Germany: Multikulti ist tot (Multiculturalism is dead). We cannot have people many of whom not even speak the language of the country, who very much despise the country and its customs living side by side with people that they actually hate. Sooner than later - last night was one of those times - violence explodes.

Posted by London Regional Press Office at 23:23 No comments:

Kathy Griffin: In a country in which there is a history of Presidents killed, she should be in jail

Kathy Griffin: In a country in which there is a history of Presidents killed, she should be in jail.

We welcome the decision of CNN to fire Kathy Griffin. It was the right thing to do to get rid of an individual that seems to have lost the plot by posing in a picture that constitutes incitement to kill an American President.

She accuses others and poses as a victim when she is fully responsible for what she did. The picture would not have been published if she had not allowed herself to be photographed. She even made fun of it all while the picture was being taken. Nobody broke her. She broke herself by engaging in an act that constitutes incitement to murder.

Her act was condemned by both Republicans and Democrats. Therefore, she cannot claim that there is a political angle to the story. She should acting in a humble manner and thank the authorities for not taking her into custody to be prosecuted and jailed for what she did.
Posted by London Regional Press Office at 10:01 No comments: