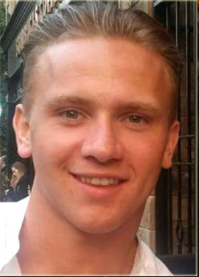 The Police Authorities are trying to keep the affair as low-key as possible in something that bring back echoes of what happened to Lee Rigby in London.

Bury St Edmunds is about 30 miles from RAF Marham, where two Muslims tried to kidnap an RAF serviceman who was out running near the base in July 2016.

After a series of kidnapping attempts of military personnel, the Armed Forces issued guidelines asking military personnel not to wear military uniforms - unless necessary - for fear that they could be prone to be attacked by Muslims.

Well, for Corrie McKeague and his family's sake, let's hope that Muslim operators were not involved in his disappearance.

Undoubtedly, having hundreds of thousands potential terrorists living in the United Kingdom is a liability and a calculated risk. Islamic State stated that it would carry out operations in Europe and United Kingdom's military personnel are bound to be targeted.
Posted by London Regional Press Office at 19:46 No comments: